After a good night’s sleep at The Windmill we were ready for another day’s walking. Although we had checked out of the B&B the owners were happy for us to leave our luggage there for the day, which meant much lighter packs than would otherwise have been the case.

We started slightly later as we had to finish checking out once breakfast was over, so we caught the 10.15 bus to Camber Sands, rather enjoying the sight of a double decker bus disgorging dozens of elderly people arriving in Rye for the market. There were so many we were sure they must have been three to a seat upstairs!

We were soon back at Camber and heading east again. We explored the main street of the village, with its Pontins holiday camp and somewhat tacky gift shops, reluctantly resisting the temptation of a plastic castle bucket in the shape of a tower and wall with battlements! 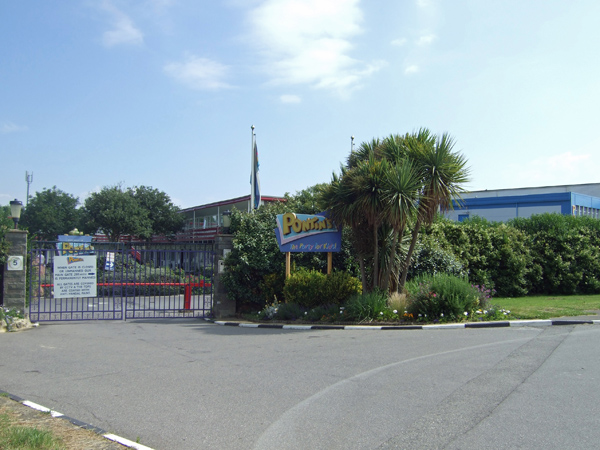 As the houses ran out we cut across a playing field and down onto the beach. The tide was way out and we found some pleasant walking along the firm sand. As we marched along, we enjoyed watching people preparing their kite-surfers for a day of catching the wind. Eventually, we could see the beginnings of the army ranges at Jury’s Gap and had to find a place to scramble up from the beach onto the road again. The red flags were flying and there was no hope of reaching Dungeness by the sea route, even if we had the time and energy to walk seven miles over shingle.

We had discovered a new map symbol while checking the route and now know that a row of orange dots beside a road means that there is an off-road cycle track. There appeared to be one all the way from Jury’s Gap to Lydd and we were looking forward to walking it. First though a stop at Jury’s Gap by the coastguard cottages and a pleasant chat with a family of cyclists who had cycled from Brussels! The cycle path proved to be a wonderful safe way of walking what would have been a difficult and busy road. The path ran parallel to the road but completely separate and we were able to enjoy the sight of yet more sheep and watch the wind farm retreat behind us. 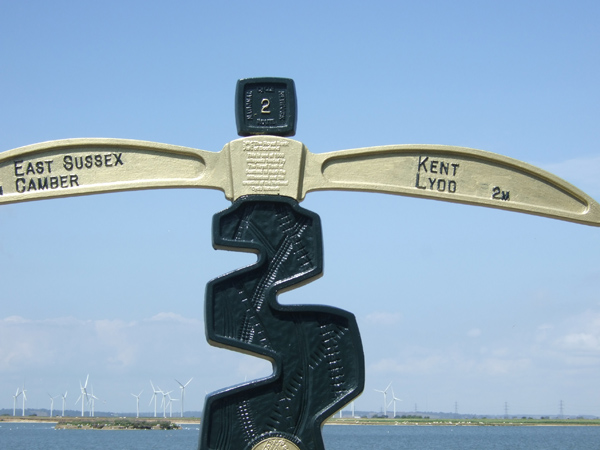 After a while we spotted a sign on the road which heralded the crossing into Kent and, to our delight, there was one on the path too. We stopped to admire it and enjoyed a rest and some grapes here to celebrate our third complete county crossing.

It was very hot walking as the path was quite overgrown and there was no sea breeze to cool us. We were very glad to be told by an elderly gentleman whom we met a little further on that we were nearly in Lydd and that the “best watering hole in town” was the George, two thirds of the way down the High Street.

He was quite right, the George was splendid, if a little further away than we would have liked. But it provided cold drinks and one of the best pub meals we have had for a long while. We chatted to a Welsh businessman, whose mobile ring tone was the Welsh National Anthem, which startled me somewhat when it rang while I was reading a Guinness advert about rugby sponsorship at the bar. After an hour or so in The George and a study of the bus timetables, we decided to catch the bus onwards to New Romney then ride all the way back to Rye on the next one. 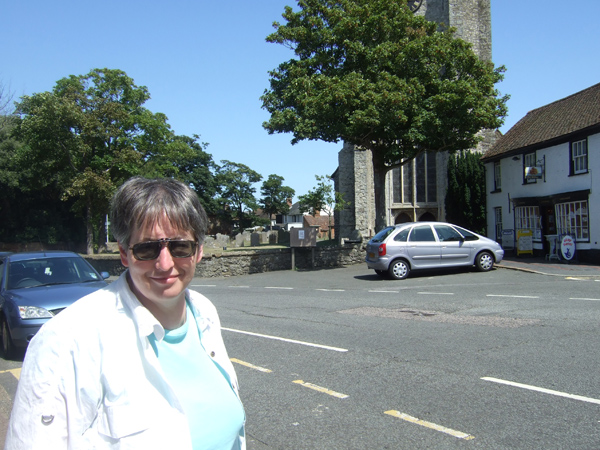 We only had time to cross the road in New Romney and hop on the next bus back, but it was interesting and in the shade and sitting down. Once back at Rye we had a cup of tea, retrieved our luggage from the Windmill and headed for the station and home.