Exactly a year after we had finished a walk at the Plough and Sail in Paglesham Eastend, we were back again to begin one. The intervening year has been eventful with a move for me to Cambridgeshire which meant that Jen and I have to plan more carefully as she is still in Surrey. In the end she elected to come and stay with me for a few days which meant we could travel together and not have to worry about meeting somewhere en route.

We decided that as this walk was quite short we would do it in one day so we arrived at Peterborough Station just after 6am only to discover that our train and the one after it had been cancelled. We had tickets for the slower Thameslink service to London as it is very much cheaper than the LNER express but today our tickets were accepted on the fast service and we arrived in London very quickly. From Kings Cross we travelled to Liverpool Street then out to Wickford where we changed to a rail replacement bus for the last leg to Rochford. 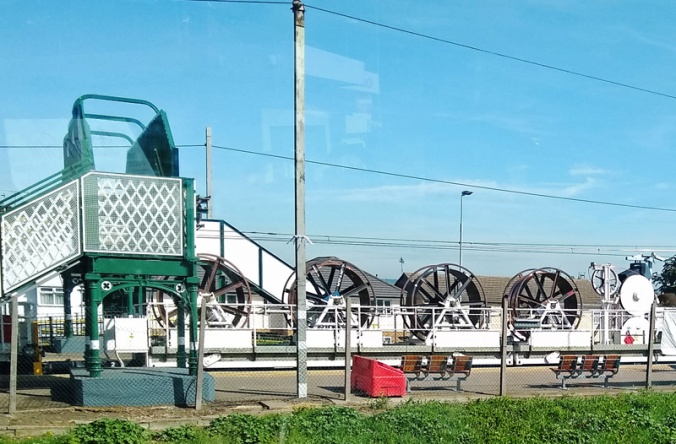 This snap though the bus window as we left Rayleigh Station shows a train carrying cables ready to upgrade the line to Southend, which is the reason for us being on a replacement bus. Having stayed at Rochford several times we knew there were toilets and a little Sainsbury’s near the station so after using both we climbed into a taxi for the last couple of miles to Paglesham Eastend.

We arrived outside the Plough and Sail at 1015 and were soon ready to go. Paglesham is a tiny parish with two distinct settlements a few miles apart. Once a fishing village and renowned smuggling centre it is now a quiet backwater with some beautiful houses. The name comes from the word pagle; an ancient word for cowslip. The Plough and Sail pub is over 300 years old and is still a popular destination for lunch with a menu featuring many fish dishes. The whole of Paglesham is a conservation area and it is definitely a very pretty corner of Essex.

It was a short walk along a rutted lane past these lovely old cottages to the bank of the River Roach. The cottages were built by the owners of oyster fishing companies in the days when oyster smacks were based at Paglesham. Once housing fishermen, they are now highly desirable and expensive properties.

At the end of the lane we came to a small boatyard where a flight of steps took us up onto the bank and a familiar scene of narrow grassy path alongside a rather uninteresting stretch of water. Shortly we came across a sort of compound protected by military type fencing which appeared to contain a couple of wrecks.

There must be a story here but all I can find is that it is the location of the last remaining oyster beds.  Somewhere near here, however, is the resting place of HMS Beagle, which, once Charles Darwin had finished with it, ended up on this stretch of river as a coastguard ship guarding against smugglers. The ship was, apparently, stripped down and the hull is now thought to be about twenty feet under the mud.

From then on for about three miles it was just a trudge along the path, sometimes easy and open, sometimes covered in long grass and quite hard work to push through. Luckily Jen and I never run out of conversation which helps to keep us moving on. Our destination was visible across the river long before we got there. 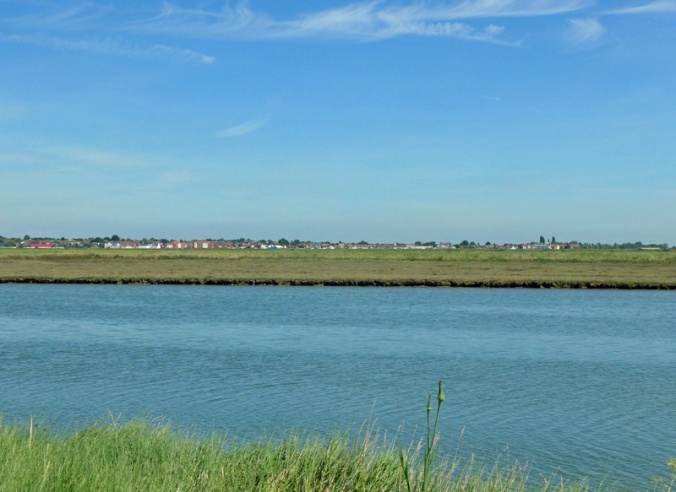 The weather was good although a little too hot for walking and we took the opportunity to stop for lunch in the shade of a couple of trees – the only shade anywhere in sight. It meant dropping down to a path below the creek bank but the chance of some shade was not to be missed. As always, I took a photo of the view from our lunch spot.

After lunch we continued along to the end of the creek wall and a footpath junction with the Roach Valley Way, an old friend from last year. The new path crossed a dry stream bed and headed off very obviously along a field edge to a road. Unfortunately I caught my foot in a hole clambering down the slope and went flying. Fortunately, the upward slope on the other side of the stream bed meant I didn’t fall far and I carried on with a slight twinge in the right ankle and another in the left knee. They wore off as we enjoyed this easy path and came out on Creeksea Ferry Road.

One of the features of this part of Essex seems to be the speed people drive on these tiny country roads and this one was no exception. Thankfully we were only on the road for about half a mile before it turned sharp right toward the marina. We followed it for a few yards then had second thoughts, realised we had gone wrong and retraced our steps to the junction. Here an elderly man was loading up his car with fishing gear and he directed us to a path on the opposite side of the road. If we had stopped to look at the map, it would have been obvious but we didn’t and, anyway, I never pass a chance for a chat with a local.

The path turned into a wide recently mown grassy area beneath a high embankment beside a stretch of water which was in effect a long thin lake. On the other bank was the aptly named Riverside Village Holiday Park with some very well cared for mobile homes and we enjoyed looking at their gardens as we wandered along. After a mile or so the path ended and we climbed up onto the sea wall to find the most beautiful view of the River Crouch and a breeze.

We joined a man sitting on a bench for a few minutes before setting off along the wall towards the marina we could see in the distance. 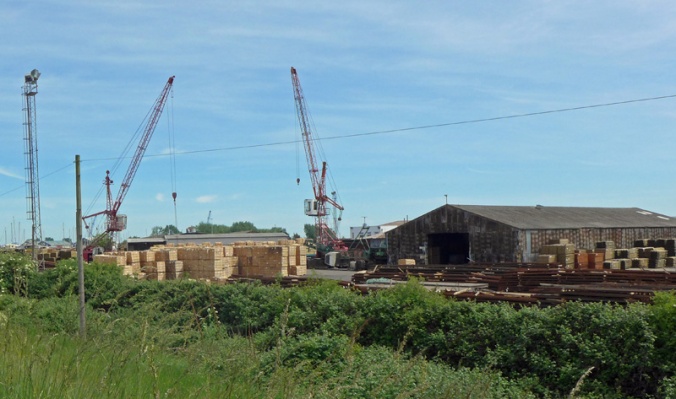 We were surprised to see a proper wharf with goods piled up ready to be shipped but soon the industry gave way to pleasure as we approached the marina proper. There were some very beautiful boats moored here and we enjoyed watching them as we waited for the ferry to come across from Burnham. A breeze had sprung up and it was very pleasant sitting in the sun.

Twenty minutes later the ferry came into view and we made our way down to the landing stage. We knew the ferry was small and open and it felt very basic as the skipper helped us climb over the side and sit down. There were twelve seats; six on each side and we shared the ride with two families who were together. 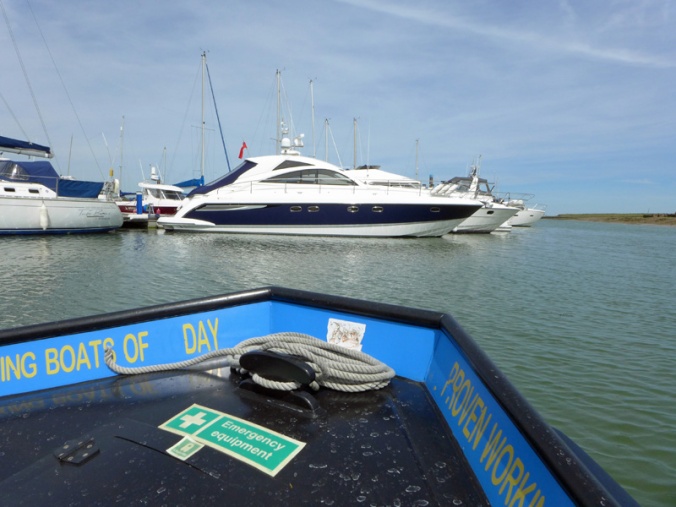 What we had not realised was that as the ferry was very low in the water, the waves would splash over the bow and, as I was sitting at the front, I got soaked. Not just damp, wet right through to my undies! I was very glad it was a warm summer’s day or it would have been very uncomfortable. Once we got off, we found a sun-warmed brick wall to sit on for a while to help the drying process as we watched the ferry head back to Wallasea.

Half an hour later, we set off up the high street towards the station and we passed a charity shop and decided to go and have a look. They had a brand new, perfect tunic top which I bought and changed into, which made me feel a lot better. At least the top half of me was dry and the bottoms were well on the way.

We began our journey home with a dash for the train at Burnham station but after that it was all very straightforward and we were back by 8pm. This had been a fairly short walk but necessary to fill in the gap we left last year when we realised the ferry does not run after the end of September. Later in the year we will pick up at Tillingham and begin to explore the River Blackwater as we head north through Essex.