We set off very early this morning on the 7.13 train from Guildford, taking our breakfast with us to eat on the way. We had a good connection at Havant and a run under the subway at Barnham to catch the connection to Bognor Regis arriving just before 9. It then seemed like a good idea to make use of the toilets at Bognor station before we started walking. Big mistake! They have to be some of the most revolting toilets we have ever met anywhere. They were dirty and smelly but oh so grand with stained glass windows, Southern green and cream paintwork and original fittings. If only someone could smarten them up they would be a real asset.

We took some photos of the rest of the slightly decayed station before catching the bus back to Elmer. At Elmer we quickly found the path onto the beach and were soon within sound of crashing waves again.

The tide was in and after a brief photo stop we set off along the bank above the shingle beach. The path was not as easy on the feet as we had hoped having been apparently recently re-covered with a thick layer of stones.

We ploughed on past Poole Place, a farm well defended from demon walkers with signs and barbed wire. Apparently there is a long standing battle between ramblers and the landowners here about the route of the path so we played safe and stuck to the beach as instructed in our guidebook.

In the trees ahead we spotted Bailiffscourt House, now a luxury hotel – top rate £600 a night for bed and breakfast. The house has a fascinating history being nowhere near as old as it looks; it was built in the 1920s for one of the Guinness family who asked the architect to design a medieval mansion, which he did. The house became a centre for society events during the 1930s until the death of the lady of the family in1939. Soon afterwards it was sold and has been a hotel since 1948 catering for those indulgent breaks we all dream about.

Fairly soon we came across a car park at Climping Beach. We knew from the book and maps that a car park was located here but the size of it took us by surprise. It was very big with grass in the centre, loos, bins, information and, its crowning glory, a fish and chip stall, already doing a brisk trade. We sat on the wall and ate some fruit but the weather was too hot and sticky and the hour just wrong for chips. It was misty and very humid without any breeze from the sea and actually quite hard going.

From Climping we continued along the top of the shingle bank finding this strange part of the sea wall which looked as though it may have been a pill box. Peeping through the holes we realised the drop to the road below was massive and the branches we could see were actually the tops of very tall trees. What a scary place this must have been on a dark night in wartime. 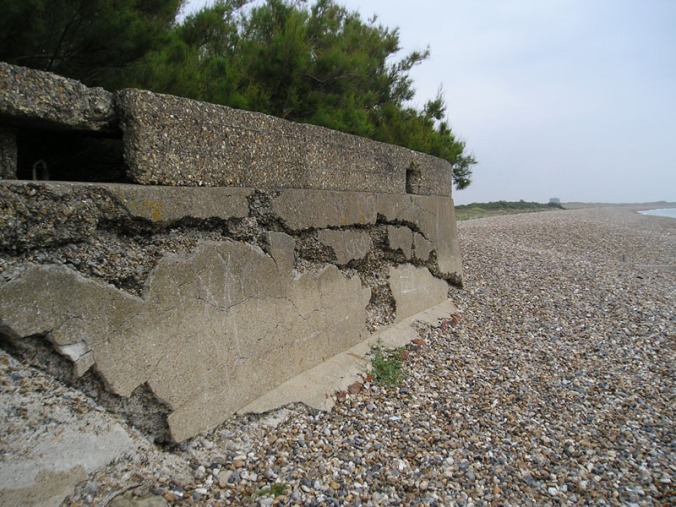 As we scrunched onwards, we enjoyed the sight and sound of an aeroplane practising aerobatics above us.

Suddenly we arrived at the beginning of a nature reserve and met some families camping at the back of the beach. They came out of their tents to greet us so we stopped for a break and a chat. We declined the offer of a cup of tea as we wanted to keep going to reach Littlehampton before lunch. One of the campers told us to keep to the top of the beach just under the sand dunes and that the going there would become easier. He was quite right and although out of sight of the sea for a lot of the time, the path became more gravely and much faster.  As we went along the mist cleared, the sun came out and the humidity dropped, all of which made walking much more pleasant.

At the end of the path we rounded the corner and quite unexpectedly came across civilization!  We had arrived at the River Arun and the town of Littlehampton. The contrast between the shingly beach and the sounds of wildlife behind us with the seaside resort we could see on the other side was quite startling. 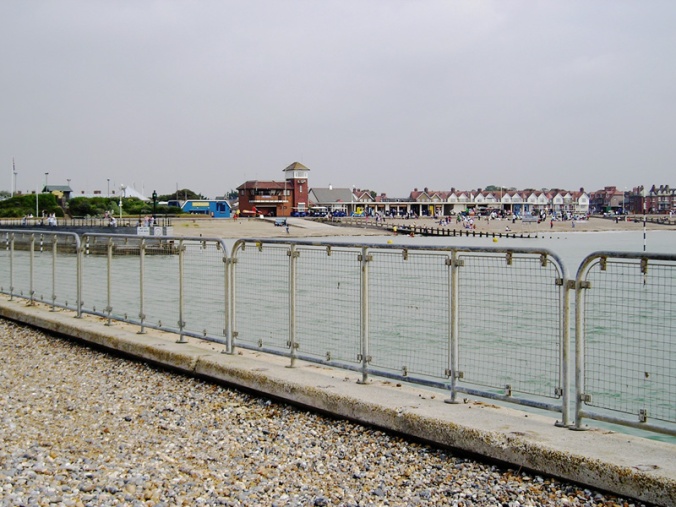 The Arun here is very wide and busy and frustratingly, the first crossing is a couple of miles inland. Before we tackled the riverside walk we stopped at a café for a drink and some food.  I had a gorgeous bacon roll dripping with melted butter and loveliness, which later turned out to be somewhat disastrous.

We used he car park loos which were infinitely better than those at Bognor Station, then suitably refreshed and generally sorted out we followed the west bank of the river past moorings of all kinds, leisure and commercial, to a footbridge, which we crossed before heading back down the east bank. Littlehampton footbridge was built in 1981 to replace a ferry service here. The middle retracts to allow larger ships to dock at the port upriver and it is opened on average 500 times a year. We had just crossed when the siren sounded so we counted ourselves lucky as any bridge opening is a ponderous business.

The route took us back towards the sea and just into the edge of the town centre where we succumbed to the temptation of a charity shop but with our shoulder muscles in mind only bought one book each!

The path then continued seawards past shops and restaurants and a fun park with an amazing castle slide. An hour after we had stopped at the café on the west bank, we arrived on the opposite bank of the river. The countryside and river mouth had suddenly turned into a full blown seaside resort with sand, sunbathers and a Dotto train. We stopped here for a few minutes to enjoy the atmosphere and people-watch (by the tower in the photo).  The sun had become very warm as we moved on just as far as an ice cream stall with a convenient bench next door to rest while our vanilla cones dripped down our fingers faster than we could eat them.

While we were licking ourselves clean, we jumped at the sound of the lifeguard over a loudspeaker warning people to keep away from the river mouth with its treacherous currents and surprisingly large vessels sailing in and out.

The whole seafront was very busy with holidaymakers and lots of day trippers, judging by the number of coaches in the coach park.

We decided to wait until we reached the next settlement, Rustington, to look for lunch so we pressed on. As we left Littlehampton behind the promenade became quieter and soon we were walking along suburban sea side roads in Rustington. We passed lots of flats and a beautiful convalescent home.

There was no sign of anywhere to eat but we did not feel that it was urgent so kept walking along a path in front of some more flats and then away from houses altogether onto a greensward. There were several greenswards all of which seem to belong to the houses behind them but which have public access along the beach front. There were plenty of families enjoying the green strips for picnics and games

Our planned stopping point for the day was Angmering Station and as we neared East Preston, we decided to turn inland to see if we could find a shop or a café on the road up to the station. However it was just made up of very exclusive houses on a private estate. Eventually we did find the village centre and some shops and bought some pasties and drinks to eat on the way home.

We had a superb journey home and felt fine with no aches and pains. However there must have been some sort of eggy contamination to my bacon roll as round about midnight I had the usual reaction to eating egg. As it always happens 12 hours after I have eaten, I could pinpoint it to the little café but I suspect it was no-one’s fault and that probably the bacon had simply been fried in the same pan as an egg. One of those things and it did not detract from the enjoyment of the day.